Takes a while to charge 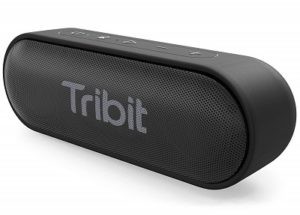 Given that billions of people now have a Bluetooth-enabled audio player (i.e. their smartphone) at their side 24 hours a day, it’s a good bet that many of these folks would enjoy having a Bluetooth speaker to turn their phones into a portable music system. In light of the fact that most music is now streamed (and therefore pretty compressed), it makes sense to look at the lower-end of the market for good values. Looking to carve out a niche for itself, established accessory manufacturer iClever launched its Tribit line in 2017 to cater to style- and cost-conscious smartphone owners, and we’ve already tested Tribit’s excellent XFree Tune Bluetooth Headset, and now we’re taking its portable speaker for a whirl.

Tribit has taken a page out of the Beats book in its design approach to the XSound Go. Clearly reminiscent of the Beats Pill that debuted in 2012, and has since been iterated many time, the biggest difference is the price tag: around $30, versus $130 for the current . The big question, of course, is whether it can compete, but one clue to whether Bluetooth speakers have been just a tad overpriced over the years was proven when Apple bought Beats for $3 billion in 2014. Surely, it wouldn’t have done so if there weren’t a pretty good margin on brand-name Bluetooth products at the time. Back then, most Bluetooth speakers were pegged at $200, so clearly, things have changed at least a little bit.

So, does the XSound Go punch above its price class? Read on to find out!

We’d like to extend a special thank you to Tribit for providing us with a review sample of the .

The XSound Go has a fairly standard industrial design, as we’ve already made clear, meaning it blends in with a lot of the products out on the market today. That’s a far cry from the the XSound Go’s predecessor, the iClever BTS-09, which we previously reviewed and thought looked a whole lot like a UFO! The good news is that the “pill” design is pretty well-optimized for speakers at this point, and truly makes sense from both a portability and performance standpoint.

Measuring about 6.75″ wide and both 2.25″ deep and tall, the XSound Go isn’t quite pocketable, but it’s certainly easy to fit in just about any bag. Then again, it might weigh you down a bit; it came in at 13.4 ounces on our scale, or nearly a full pound. You can definitely feel its heft when you pick it up. Now, the truth is that most of the weight is probably the battery, and while Tribit hasn’t published its capacity, it’s most certainly pretty large. Tribit claims that the XSound Go will run for 24 hours at medium volumes, and we have no doubt that this is correct. We didn’t have to recharge the XSound Go during our entire testing period, but we and it certainly did have to wait a while for it to charge up prior to testing. In fact, it took so long to charge that we thought our charger wasn’t working (you have to supply your own, by the way). Plan on charging the XSound Go for 4-5 hours every time it runs out of juice.

The big battery isn’t the XSound Go’s only distinguishing feature. It’s also waterproof, and it’s also coated in a very classy matte rubber finish that looks great, provides a nice amount of grip, doesn’t pick up fingerprints, and probably offers a bit of shock-proofing too. It also has four small molded-in feet, which provide surprisingly good grip thatnks to that matte rubber material. Another great feature is Bluetooth 4.2, which really is a generational leap versus older protocols. Tribit claims that the XSound Go has a range of 66 feet, and as far as we could tell, this was quite accurate. While previous speakers and headsets we’ve tested wouldn’t work through a single wall or more than 30 feet away even in clear view, we could take the XSound Go across the house and it would still work. Impressive!

In the box, you get the speaker and two accessories: a USB cable for charging, and a lanyard for tying around the XSound Go’s built-in loop. Truth be told, this lanyard looks suspiciously like a shoelace, and given the weight of the XSound Go, we don’t think anyone’s going to have it hanging off their wrist while in use. While the speaker has a 3.5″ aux in port, it doesn’t include a cable, and with most devices having Bluetooth nowadays, we expect few people would use it anyway, so this is a fair cost savings.

Overall, we were pretty impressed with the features offered by the XSound Go, but ultimately, it has to perform to get a passing grade. Based on the dual 6W speakers it carries on board, it should pack a punch, but you’ll have to read on to see how it did! 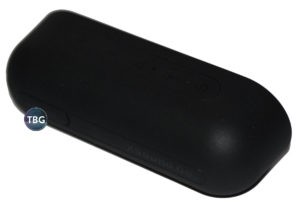 So, let’s start with getting the XSound Go up and running. Controls are pretty basic, not surprising given that you’ll probably be controlling sound with your playback device, rather than the XSound Go itself. It has a power button, Bluetooth button, a play button, and volume up/down buttons. Our one disappointment was that the Play button didn’t reliably work to pause music on our Samsung Galaxy Android-based smartphone. Perhaps it works with other phones, but given that it doesn’t include the universal “pause” icon, we’re not so sure. Note that promotional photos of the XSound Go, like the one at the beginning of this article, show the control buttons outlined in silver, but the actual retail product doesn’t have this silver coloring, which makes the buttons much hard to see. Can you spot them in the photo here? Squint and you might catch them! On the flip side, we do like the subtle, stylish embossed nameplate on the rear of the speaker. We truly appreciate that Tribit isn’t using the XSound Go as a marketing tool to be carried by its users like so many other audio brands.

So, this is going to be pretty simple: the XSound Go rocked! We tested it with a wide range of music, and no matter what we threw at it, the XSound Go punched way above its weight class. Did it sound as good as our B&W floor standing speakers hooked up to a Pioneer Elite amplifier? No, of course not. But it doesn’t have to. What we were impressed by is how much better it sounded that every other $30 Bluetooth speaker we’ve tested (and we’ve tested a lot), as well as its ability to keep up with much more expensive audio products.

Now, one thing we noticed about the XSound Go is that it has a lot of thump in its chassis, but its actual bass production is pretty minimal. That doesn’t bother us so much, but we do wonder why it vibrates so much. It’s not like there’s a subwoofer hidden in there. Luckily, it still sounded much fuller than every other sub-$100 speaker we’ve tried, and it could easily keep up with the likes of our full-size Amazon Echo smart speaker. In fact, pairing the XSound Go up with an  will give you an awesome wireless, voice-controlled sound system for well under $100. They’re really a perfect match!

Honestly, the XSound Go is so good, and so incredibly cheap, that it becomes the very first product that we can recommend without any reservation. Seriously, the only issues we had with it were very minor. Its giant battery (the one that gives it 24 hours of playback time) takes a long time to charge, at least four hours, or longer than your smartphone and laptop combined. And the controls are a little hard to see, given that they are the same color as the body. But otherwise, the XSound Go is a perfect low-cost sound machine!

The  is available for , as of our publication date, making it a must-buy accessory for any music fan!